Miniature Crochet Bears .. with some Tatting

My grandmother is a great artist in many needlework techniques: crochet, knitting, tatting, and some others that I don't even how they are called. I learned a lot of crochet with her, I remember starting doing dresses for my Barbie dolls and eventually clothes for myself.  I am now trying to pick up my tatting classes, and hopefully will move on to knitting one day.

It has been a long time since I last did any crochet work, probably four years or more. But now that I have some spare time I decided to practice my crochet and make sure I haven't forgotten. 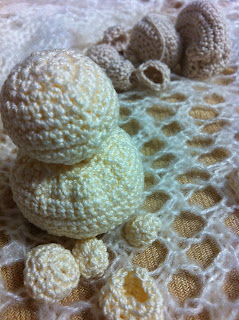 For this first "recalling" crochet project I decided to work on something I always wanted to do but never got a chance to: Miniature Crochet Bears!

I wanted however to incorporate some tatting on them, so the project is now a Miniature Weeding Bear couple! with the bride's dress and flower bouquet done in tatting. It sounds like a great project, but I'm not sure how it will turn out, so let's see....

You can see in the picture what I have so far, hopefully tomorrow I will finish putting the bears together and will start with the tatting work.

Will post pictures as I progress.
Sirena.
Posted by Unknown at 9:59 PM
Email ThisBlogThis!Share to TwitterShare to FacebookShare to Pinterest