Hi Everyone, I have just posted some pictures of my latest tatting shuttles. One that I am particularly happy to have in my collection is the 'Detach-a-bobbin' shuttle, this shuttle was produced by the Justrite Manufacturing Company, the same company that produced the 'Detach-a-Spool' tatting shuttle. 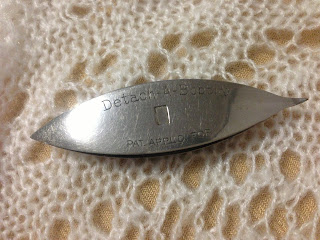 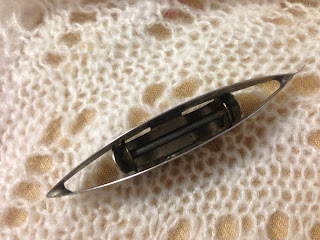 Please come by and check out my tatting shuttle collection section for the latest pictures including a Bucilla tatting shuttle, N.R.Co rubber shuttle, pearlescent shuttles and more.

Thank you for visiting!

Posted by Unknown at 9:35 PM 3 comments:
Email ThisBlogThis!Share to TwitterShare to FacebookShare to Pinterest

I wanted to share with you a couple of pictures. First, a non tatting-related matter: I want to introduce you to Titan my lovely American Bulldog. I wanted to post his picture as he is one of the reasons that kept me away from the blog last year.

He was found on the streets, dirty and thirsty. I posted his pictures everywhere but no one came to claim him. After some time of interacting with him it was clear that he had been physically abused. He's extremely nervous, when scared he shakes like a Chihuahua and puts his tail between his legs. He does not like when small dogs bark at him, he will just hide behind your legs and put his ears back. But we are working on building up his confidence, he is a extremely sweet dog and loves to be pampered.

When we took him to the vet, he was diagnosed with hearth-worm disease, something I had never heard of, a disease that can be fatal to both dogs and cats if not treated. He is responding well to the very painful treatment, in fact, today he is getting his second and last shot.

He has been a great companion, a beautiful sweet dog.  :)


Now, going back to tatting I wanted to share a picture of a pair of baby booties made by Ceci. Aren't those just the cutest? 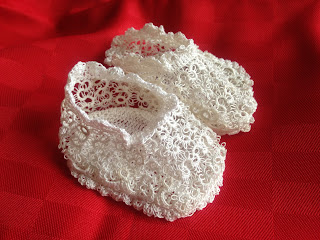 I'll have this picture posted in the  'Ceci's Tatting' section. I invite you to come and take a look at the latest updates, there are new pictures in 'Ceci's Tatting', 'My Tatting' and the  'Tatting Shuttles Collection' pages.

Hello Everyone, I have some interesting news. First of all, just wanted to say that I am glad I was able to complete Diane's Double Dare before the year 2012 ended, of course it took me a little more than expected but I did it! Again, thank you Diane for the beautiful doodads.

Second, I am happy to say that I also completed my miniature crochet bears, I was planning on adding tatted clothing, but for now the only tatting they have is their eyes: 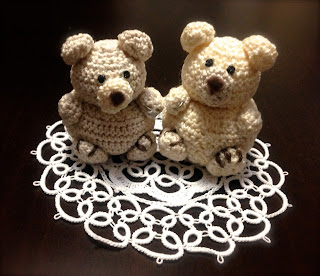 Also, I took some time this week to update the 'Tatting Shuttle Collection' page, please go and check it out, I added over 10 more pictures, rearranged the order of the shuttles, and created some links for the latests updates.

Finally, I am very excited about this: I created a Spanish version of the site, it is now available and you can navigate using the link on the right side of the menu bar. I wanted to create the Spanish site for my grandma Ceci, and for the visitors from Spain and Latin America.

Thank you for stopping by at Ceci's Tatting World, I will be uploading new pictures of Cecis's and my own tatting soon, so please come back and check them out.

Posted by Unknown at 10:34 PM 2 comments:
Email ThisBlogThis!Share to TwitterShare to FacebookShare to Pinterest 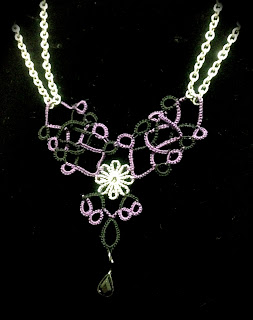 I finally got to work on Diane's Double Dare, I decided to use the beautiful doodads to make some jewelry.

Here is the picture of the necklace, I saw a similar one a while ago online and saved the picture to make one for myself.

I am going to use the second doodad to create a second necklace using black/blue thread.  :)


I am now looking to finish my bears, I will keep them simple.
Posted by Unknown at 11:15 PM 2 comments:
Email ThisBlogThis!Share to TwitterShare to FacebookShare to Pinterest

Hi Everyone,  I have been away from the blog for a while, so many things happened in my life and I haven't have a chance to update the blog, finish my crochet bears, or even start with Diane's double dare :(

Well...  it's December and as I get up to date with the blog and pending projects I will begin to upload pictures on the - Ceci's Tatting section.

Sorry for the lack of updates, hope you all come back and check out the - Cecis' Tatting section.


Posted by Unknown at 10:42 PM 2 comments:
Email ThisBlogThis!Share to TwitterShare to FacebookShare to Pinterest

Well, I am not quite done with the crochet bears as I have been using some glue to paste the accessories  and have to give it a little time to dry. So while I wait, a new challenge has arrived! This one came from a great blog of a fellow tatter:  lacelovinlibrarian.blogspot.com 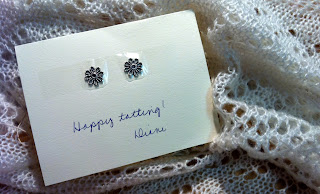 Diane's Doodad Double Dare consist of making a tatted design around the doodads, mine arrived yesterday on the mail and I am gathering ideas of what to tat. There are no official rules, it could be anything! I am thinking jewelry, let's see how it goes.

Miniature Crochet Bears .. with some Tatting

My grandmother is a great artist in many needlework techniques: crochet, knitting, tatting, and some others that I don't even how they are called. I learned a lot of crochet with her, I remember starting doing dresses for my Barbie dolls and eventually clothes for myself.  I am now trying to pick up my tatting classes, and hopefully will move on to knitting one day.

It has been a long time since I last did any crochet work, probably four years or more. But now that I have some spare time I decided to practice my crochet and make sure I haven't forgotten.

For this first "recalling" crochet project I decided to work on something I always wanted to do but never got a chance to: Miniature Crochet Bears!

I wanted however to incorporate some tatting on them, so the project is now a Miniature Weeding Bear couple! with the bride's dress and flower bouquet done in tatting. It sounds like a great project, but I'm not sure how it will turn out, so let's see....

You can see in the picture what I have so far, hopefully tomorrow I will finish putting the bears together and will start with the tatting work.